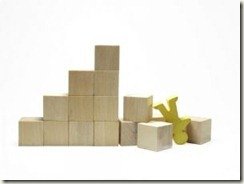 Here are 3 things you can keep in mind to avoid “overpaying” for mistakes as you experiment your way up the ladder:

It’s OK to make mistakes, but a common trap is when you keep making the same mistakes over and over again, and then wonder why nothing is changing.

Making mistakes in themselves aren’t bad things, but you do need to make sure you're learning from those mistakes. A simple improvement technique is to consistently review your performance, whether good or bad.

What specifically did I do well?

What specifically needs to be adjusted?

It’s easy to beat yourself up over mistakes. Sometimes people will mentally review times they’ve screwed up for years and years after the event. I know it can be hard to forget, but like the saying goes, “It’s a nice place to visit, but I wouldn’t want to live there.”

Once you've analyzed what needs to happen, put the new solution in place and move on.

Here’s a little hack to get you moving in the right direction. When you feel yourself re-analyzing an old situation, cut yourself off in mid-thought and say, “But that’s when I started to… (insert new positive habit).”

It won’t work every time, but it’s a good start.

Don’t beat yourself up

We’ve all heard it said that it’s fine to make mistakes, but for some reason, people think that applies to everyone else, but themselves.

Many people think of themselves as perfectionists, which in theory should be a good thing, but in reality, it often holds good people back from achieving more.

A perfectionist mentality can limit the types of activities you try and slows you down as you put the finishing touches on every last useless detail of your project (which nobody else cares about).

People who are rapidly building careers and fortunes are still doing amazing work, but they understand that everything in the world can’t be perfect all of the time, especially if you’re relying on other people for all or part of the results.

Successful people make mistakes all the time. It’s what helps smart people move from being pretty good to being unbelievably good.