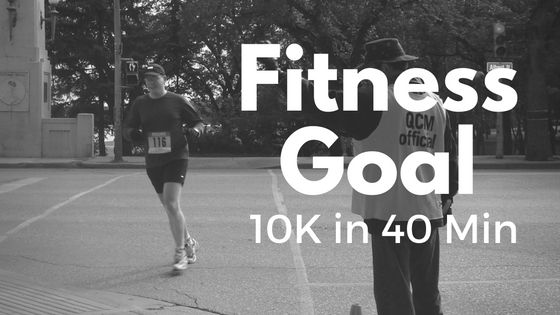 There are plenty of things I could have chosen for a fitness goal. For this challenge I'm going to focus on running.

I've been fairly sedentary over the past few months/years, so it will take dedication and planning to achieve it.

The basis behind my 4 minute kilometer goal came from the conversation that got me into running.

It was probably 13 years ago or so that I had a conversation with a manager of mine. He was big into running and we were talking about racing. This manager told me how it would be a challenge to run 10K in 40 minutes. I remember thinking that it sounded easy. I told him so and that night I went out to prove that it could be done.

I've always been athletic. I played a lot of hockey growing up, along with all the traditional ones. I also made the wrestling team in university as a walk-on.

After graduation, I started focusing on work more than exercise. That meant that by the time I had the conversation with my manager, my conditioning was in pretty bad shape. In essence, I was approaching things like I was starting from scratch.

At first, I just focused on getting out most days and going for a run. My results slowly started to improve.

What I couldn't get rid of was the feeling of dread whenever I needed to go for a run. I didn't enjoy running. Not even a little bit. It was different when I had gone for runs in the past to train for other sports.

I was probably only running around 3K at the time. It was a mental struggle to keep going. My body could do it, but I wasn't enjoying the process.  I was never going to hit my goal that this pace.

Someone mentioned that I should take a running clinic. They suggested a local store called The Running Room. The Running Room is a company started in my home town of Edmonton Canada and has expanded across Canada and the US. You might not have a store in your area, but you'll probably find a friendly local running store who organizes runs in your area.

Anyway. I picked out a 10K clinic and signed up.

The results were immediate.

Joining the clinic turned my running experience around for me.

I actually learned to enjoy running. I don't have an exact reason why running was any easier. It probably has something to do with training in a group environment. We could talk, laugh, and encourage each other during our runs.

My first “unofficial” half marathon

Something cool happened one day near the end of the clinic.

We were paired up with a group training for a half marathon. Our 10K group was running the same pace as the other group, so we all started out together.

There was a point where my 10K group was preparing to turn around. As we approached the fork in the path, the leader of the half marathon group told us that anyone interested in continuing on with his group could do so. He said they were “Going to do a few more kilometers.”

I was feeling amazing that day. I had built up my training schedule and was running 7K a day at the time. I figured, “Why not.”

I didn't know it at the time, but the half-marathon group was in the process of doing their longest run for their clinic. We kept running farther and farther away from the store where I was parked. We were just cruising along at what I think was a 6 min/KM pace – which was my relaxed slow run pace.

By the time we got back to the store that day, someone with a GPS watch confirmed that we had just run slightly more than 22 KM. To give you an idea of distance, a half marathon is 21.2 KM.

That meant that without even trying I had “accidentally” run a half-marathon.

Once you know for a fact that you can run a certain distance, the next thing you always wonder is how much faster you can run it.

At the time, I was running ran approximately 6 days/week and was loving it. With a little more training, I improved my speed enough that I was eventually able to run 10K in less than 40 minutes.

I ran consistently for a few years, but eventually stopped when my daughter was born. Things were pretty busy at the time, and unfortunately running was one of my pastimes that gradually faded away.

While I was running regularly, I had signed up for a marathon. I had paid my fee about a year in advance and was looking forward to it. My daughter was born a few months later, and I pretty much stopped running cold turkey.

When the time came for the marathon, I still showed up even though I hadn't run at all in over seven months. It was already paid for, so I figured I should go ahead and participate.

All I wanted to do was finish the race. I knew I could always walk it if I had to, but I wanted to give it my best shot.

I remember how nice the first half of the marathon was. I felt good and had a fun time being around all the other people. Of course, the real gut-check came during the second half of the marathon. I got a few blisters, and that, combined with my lack of conditioning meant that the last 10-15K were pretty tough.

I never considered quitting, but I would have liked to have gone a little faster that day. I still had a good time on the course though. My dad drove around and cheered me on from several locations. My Grandma also came to a spot at around 30K and brought me a snack. My fondest memory I have of the race is stopping for a quick bite to eat and and a picture with my grandma.

I finished my first and only marathon in late 2008. I just wish I could have taken part when I was in better shape.

Who knows. Maybe I'll need to look into another full marathon during the coming year.

Where I'm at right now

I'm not in good shape right now. The last eight years have seen my fitness levels drop off.

I was having a great time last year taking part in a fitness program called Get Driver Fit. It's scheduled every year leading up to the Abu Dhabi Formula One race. The program was based around the fact that world class racing drivers need to be in amazing shape. They need to be able to handle the tremendous g force created my their cars. They also need to have enough endurance to drive all-out for several hours at a time.

I used to live close to the Yas Marina Circuit, so I would go over there for training a few times a week. It was great. at the end of the program, I got to go through a crazy obstacle course on the beach. It was great.

I've since moved back to Canada, so I wasn't able to take part this year.

I've been pretty sedentary for the last 10 months or so. We traveled a lot and I let that be the excuse for me to stop working out.

My goal is to take care of myself while I train.

I've set some goals that would be great to hit, but I'm not willing to compromise my health to do it. That means I need to focus on injury presentation and recovery as much as getting out and running every day.

I've already started doing some base runs and I've noticed that I'm not getting enough rest. When you train, your body needs time to repair itself. I understand that, so I'll be setting some additional goals and focus areas to help me get there.

I'm going to dig up some more information on recovery and napping. I've always rejected taking naps during the day, but I also know that many professional athletes have an afternoon nap before a big game or match. Anyway. I'll dig up some research and report back on that, along with my results.

I'm setting a goal of being able to do the full splits by race day.

I've been close before in the past, but I'm in bad shape right now. There's a lot of information out there about flexibility and exercise, but like you already know, much of it is junk.

I will also focus on overall flexibility, but I doubt you'd ooh and aah if I told you I was going to perform a full quadriceps stretch. So yes. The splits will be the sizzle to what I'm doing and the full body flexibility will be the steak.

By there way. There's some absolute goofiness planned for when I hit this goal, so make sure you check back to see what happens when I make it.

P.S. This video might be too corny for work. 🙂

A huge factor in my success is eating right. The trouble with talking about nutrition is that everyone you talk to has a different take on what's important.

I've got some good sources to look at and I'll use this challenge as my “excuse” to move to more of a plant-based diet. I'll do a list of resources for nutrition in a separate post. I'll also look up some of my old recipes for homemade power bars. I think my kids would have making some with me.

This challenge is going to take place over the course of 5 months. That's when the races are that I plan to compete in. I also don't plan on taking any shortcuts.

I'll also continue my work on doing the splits and overall flexibility.

My goal setting post for this challenge will go over all the details about my plan. I'll set everything up and give a baseline as to where my fitness is right now. Then, you can keep track as I progress through my training.

During the upcoming weeks, I'll be including posts on my daily training plan for running and links to all the videos, pages, and books that I'll be referencing. My goal is to make sure that everything is referenced properly.

If you're interested in following along as I work my way through my challenges, you can sign up for my newsletter.