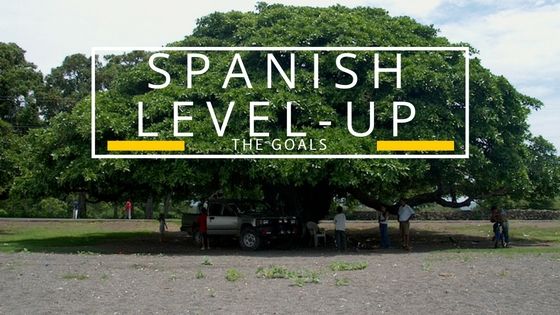 I've set a goal for myself of improving my Spanish. I'm already fortunate to have plenty of opportunities to Speak the language each day. The issue for me has been that I still cling onto my English too much. That's the reason it's taken so long to get where I am.

I'm using this post to cover the specific goals I'm setting for the challenge. If you'd like to read my backstory, you can follow this link to get to it.

The first goal seems simple enough, but of course nothing in life ever is.

My goal is to sound more natural when I speak. I bet this was the first thing to come to your mind as soon as I mentioned anything about improving my Spanish. A thick accent can really stand out, and it's probably the first way we determine how well someone speaks a language when we meet them. That means this is really good for first impressions.

Here's a list of some of the things I'll be focusing on:

I already have some credible resources for what I've been researching, but I'll try to find multiple sources to cite for you. There's a good book I've read that describes a lot of what I want to focus on. I've already taken extensive notes on it and plan to work my way through most of what it says. The book is called ¡Qué bien suena! – Mastering Spanish phonetics and phonology. The book is in Spanish, but the subtitle is in English. There's some good deals on used books if you look, but jut watch out for the people who have it listed at crazy prices.

How are we going to know if I improve

I know that by focusing on improving my Spanish for three months, there's bound to be an improvement. Unfortunately, we can't really hook me up to a machine and have it tell me I've improved 10%. There's two things I'm going to do.

1. Record myself and self-evaluate

The first is to record myself. I'll take a baseline measurement of where I'm at now. You'll also get to hear me speak Spanish for the first time. I don't think I've posted anything to the blog or my YouTube channel in Spanish yet.

I'll spend three months focusing on pronunciation, rhythm, and all the other tools. Part of the success of my goals will rely on me feeling like I've made improvements. That's the purpose of the self-evaluation. This will also help me figure out what I did that helped, and what potentially helped more. I think everything I do will be useful, but my goal is to obviously focus on what gives me the most bang for my buck.

2. Before and after evaluations from other people

I'll have several people listen to me in the next week or two. I'll get feedback from people I already know, so I should be able to get a lot wrapped up in a week or so. I think I'll try to get around 10-20 people listen to me and provide feedback. Then, I'll search out those people again and have another evaluation done. I'll try to get a variety of ages and countries represented.

I'll get rated based on the factors that I'm trying to improve – so pretty much everything in the bullet list a few paragraphs up. I might have to do a whole post on the factors I'm using, but it will be something that people can either do in 2 minutes, or 20 depending on how much effort they want to put in.

I made a decision several years ago to speak to my in-laws completely in Spanish. I talk about that decision more in the My Backstory post so check it out if you haven't already. Choosing to get involved in “regular” everyday conversations was one of the best things I started doing.

This goal may seem weak to you, but it encapsulates everything I'm trying to do. The whole point of learning Spanish for me is to be able to sit down with anyone, anywhere, and talk about anything. That's what my “Authentic Conversations” goal is trying to achieve.

I mentioned in another post that I recently helped out with some home renovations. During those renovations, there were times when I was at a loss when when came to the names of the tools or some procedures. That's the type of conversations I'll be looking to have more of. I want to get involved in a broader spectrum of conversations. I'll be making up a few lists of vocabulary for topics that I'd like to be able to describe better, like podcasting, home improvements, and public speaking. I'll also decide on a few topics to go much deeper on.

My goal is to have 30 authentic conversations with a few dozen different people. This goal is mostly to go out and speak with a lot of people, but to take the time to have a deeper conversation on a more consistent basis.  Surface conversations are fine, but I would like to have more practice asking deeper probing questions, as well as improving how I express my ideas and feeling.

I feel a difference when my wife and I are out visiting. If the conversation is in English, I'm good at getting involved in the conversation. When it's in Spanish, I'm more hesitant to say what I'm thinking.

10X the amount of Spanish in my life

Over the years, I've noticed the biggest short-term increases in my ability whenever we would travel to Latin America.

Whenever I've been required to speak, read, listen, and think more, I've responded my getting better.

I know I'm stating the obvious. Most of my goal will be achieved it I can simply up the amount of Spanish I engage with on a regular basis. This goes beyond just having Spanish music or radio playing in the background. I know from experience that surrounding myself doesn't move the needle very much. The difference comes when I add even a minuscule amount of effort to what I'm doing. That small bit of “brain activation” gets things going.

With that being said, my goals in this section will reflect my feelings that I need to do something slightly above no effort to move me forward with my learning. Maybe we can call it 1% effort.

Depending on how you look at things, three months may seem like a very long time frame, or it cool seem too short.

Why not make it shorter?

Let me give you an idea of why I've chosen three months to focus on my Spanish.

I can easily read and study how to pronounce sounds in Spanish. In fact, I already have researched that. What I want to do is take my time to do things right. I'd like to focus on how I'm speaking and then go out and get involved in several dozen authentic conversations.

Experience has taught me that after an hour or two of focused Spanish, my brain turns to mush. I'm a big believer that 70 hours over three months will serve me better than going nonstop over a long weekend.

I know I could set a goal for two years and still be learning something new every day. Languages are like that. They have so many levels and so much depth that you truly can spend a lifetime studying just one language.

My goal isn't to become a university professor in Spanish, but I do want to surprise people when they speak to me.

Three months gives me plenty of opportunity to focus on how I say things, while leaving the door open to obviously continue to have authentic conversations well after the deadline has passed.