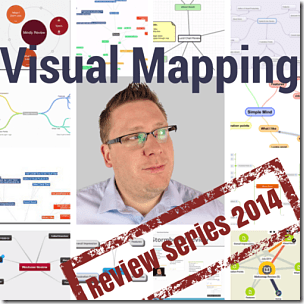 If you've spent some time watching reviews of mind mapping programs on YouTube, you've likely watched at least one of my videos. I've had well over 100 000 views overall on the series so far. The last batch of reviews (VMRS 2014) I did was way back in the summer of 2014.

I'm ready to start doing some reviews of mind mapping programs again. I'd like to take them to the next level, so I've spent some time doing research to see what viewers would like to see in a review.

What I found wasn't surprising, but it probably ended up creating more questions than it answered.

I found a huge variety of needs and wants across a wide spectrum of users. I would love to be able to answer everyone's questions and desires, but it's not realistic to review 100 individual points for each piece of software I look at.

That means I need to make some choices.

I've done several video reviews over the past two years. I tried to keep things simple by taking about my likes and dislikes. That worked fine, but even after I cut out things I wanted to talk about, I still ended up making videos that were in the 5-12 minute range. That's too long of a video for most people to watch (including me).

I'd really like to keep video length down to five minutes or less, and instead offer addition videos on particular points I want to expand upon. I'll also take the time to go more in-depth on the accompanying blog post.

I'm also considering making a big comparison chart to my site. My only hesitation is that I only want to make things you're going to use.

Sometimes I look at charts online and I think to myself, “Who cares.” I don't want to spend a whole lot of time working on a big chart that nobody will ever use.

In my mind, a comparison chart will take a lot of work to create and maintain. That's why I plan on doing a bit more research before making a decision.

I do think that charts can be eye-catching. That means that you might be willing to read the review based on what you see in a chart. In that sense, the chart doesn't provide the answer, but it works more like a launch pad for you to move off from and onto the individual reviews.

Leave me a comment down below to let me know what you think about comparison charts. Are they useful? Do you just scroll past them? How do you prefer to make a decision or learn about something new?

Going forward, I'll be making a slight chance. We'll now be referring to the Visual Mapping Review Series as the Mind Mapping Review Series. The change comes down to the fact that 1000X (embellished stat) more people search for mind mapping rather than visual mapping. I'm looking to get my posts in front of a few more eyeballs, so we're going ahead with the change.

I'll still use the terms mind mapping and visual mapping interchangeably, however, most of the writing will default to “Mind Mapping.”

When I first started doing reviews, my goal was to “Tell it like it is.”

When someone says they're going to tell it like it is, it usually turns into a rant. That's what ended up happening with some of my videos. It definitely wasn't my intent. My goal was to help you find the best program, not to be someone blasting other people's hard work.

I've had some great conversations with several software developers and have learned a few things. Everyone I've spoken to is incredibly open to feedback. The developers are ready to listen to the good and the bad about their product. Several developers even reached out to me after my reviews and advised of how they would proceed to make changes based on my feedback.

That being said, I'm not going to whitewash a review.

I just won't review (or will limit) how much I talk about a product that I don't feel is worth your time looking at. It takes one to two days for me to do a review video and article, so I don't want to waste my time talking about something I don't want you to use. I'll still offer constructive feedback for the developers, but I'll do it using my real voice, and not try to be a know-it-all (which I'm not).

Reaching out to developers

Up until now I would do the review first without talking to the company that made it. I know that seems like the wrong approach, but in the past I felt too shy to approach the developers and wasn't sure what to expect.

After seeing how awesome they are, and knowing that they usually have cool insights and stories to share, I'll be trying to connect with each of them as I prepare the review. I might see if I can do an interview or a Q&A with them too. I'll see how things go, but it might be something cool.

I know I like seeing behind the curtain of places I'm interested in and I suspect you're the same too.

Do we need a rating system?

Up until this point, I've resisted going to a rating system. I know a rating can seem useful in choosing software, but I don't know how valuable it actually is. Since I'll only be doing reviews of products I already like, most of ratings would be in the 3-5 star category.

When I personally go to a site that gives reviews I usually laugh when someone has reviewed 10 products and they're all rated 5 stars.

The folks over at Fluent Brain use a rating system consisting of 5 categories (Visual Quality, Usability, Featues, Integration, Price) and an overall score. It seems to be working for them, so I'll keep it under consideration.

That's it as far as my ideas. Is there something you'd like to see? Now's the time to make a suggestion as to how we can improve the mind mapping review series criteria.

I'm excited about all the new products out there. It's been about a year and a half since I've done a review, so there's plenty of cool changes to talk about.