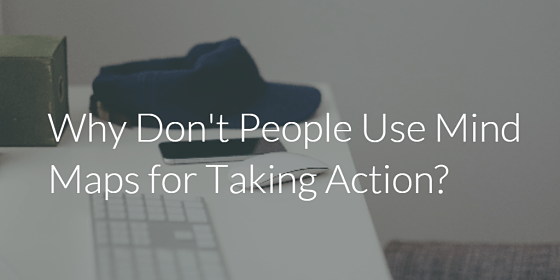 The was a great survey put out a few months ago on Biggerplate.com. It provides some stepping off points toward meaningful discussion. It's lets us find new uses for a tool we're already familiar with, and helps us feel like our contributions matter.

I'd like to add a little commentary as to why I think some of the results came out the way they did. I jotted down a few notes when I first read the survey way back in January 2015, but then my planning for the move to Abu Dhabi took over my focus.

In case you're counting, this is the second response post to the survey. Here's a link to the first article titled Do You Only Use Mind Maps for Brainstorming?

What stood out to me?

One piece of data that stood out in my mind is the responses that suggests most people don't use mind maps for taking action.

When most people think of mind mapping, they're imagining themselves brainstorming ideas and solving world problems. They might also be envisioning a document for review and study.

I also think there's a small, but growing segment of users who are taking action with their maps (Like YoureMakingMe.com readers). That's the group I want to focus on with the article.

Should people be using mind maps for productivity?

I'm bias when I answer this question, but I think it's a definite, “Yes!”

Using mind maps for productivity is great for a few reasons. One. It uses the same tool you brainstormed in, saving time. Two. It's incredibly simple to reorganize your ideas based on relevance and/or priority. Three. As you take action on your list (as long as it's prioritized) you can do the task at the top and work your way down. And four. You can delete each task as you finish it, giving you a sense of completion.

What's the best way to encourage others to try it out?

I think the #1 way to get someone interested in using mind maps for taking action, or at least, trying it for more than brainstorming or studying is to have them see the power of prioritization.

If you've heard me speak or listened to one of my interviews, you might be familiar with me constantly harping on prioritization. I love having the ability to drag and drop, copy and paste, and generally do whatever you'd like to the map. This lets you maximize the order and clarity of the ideas you've already put down and puts you in a great place to act on those ideas.

I find it slightly addictive (But I could stop anytime if I wanted… you believe me, right?).

Are you familiar with my quote:

“I don't care how hard you work. I only care about what get's done.” – Kevin Achtzener

Prioritizing can bit a bit of a slippery slope.

There's no doubt that you're being productive when you're initially staring at the rough draft. The trap of “Hard work” is what can lead to overworking the work.

Does that make me sound crazy? Overworking the work?

I think you get what I mean.

I bet I could confidently say that at one point or another in your life you've been caught by planning too much before taking action.

If not you then perhaps a friend?And if not even a friend, how about someone you saw on TV?

I know when I say it's possible to over-plan that I'll have some some people up in arms. Planning is clearly important.

But you have to agree. If all you did was plan, you'd never get anywhere.

Believe me. I'm a big proponent of planning. But there's a definite bump in the road during the transition from planning to action.

Remember the famous quote from Henry Ford. “You don't build a reputation on what you're going to do.”

Do people even remember what else they use mind maps for?

OK. I might have gotten a little off topic. Back to the Biggerplate survey…

Another reason for not having as many people say they use mind maps for something more than brainstorming is that perhaps they don't remember what else they use it for.

You could almost think of it as the “Cool Kids” effect.

Let me tell you a story.

I used to go to school on the bus.

You can tell who the cool kids are on a bus as soon as you walk on. If you've ever taken a bus to school, you know what I mean.

The back of the bus is usually reserved for the cooler… or at least the older kids. If one day I'm sitting in one of the back seats as a young kid, and someone three years older gets on, what happens?

They tell me to move.

I eventually moved to the back of the bus, and I became one of the big fish in my VERY SMALL pond.

The point I'm making is this:

Whenever anyone got onto the bus, they would take a glance back, and they instantly knew who the cool kids were.

There were always good kids seated at the front of to bus too, but they didn't have the street cred of the ones at the back of the bus.

I'm suggesting that survey respondents might have overlooked a few uses because they were so focused on how they use mind maps for a few core tasks. I would include brainstorming on the “cool” list.

But watch out brainstorming, 'cause action is making it's way to the back!

I'll leave it there for now.

You can connect with me in the comments section below. Feel free to share or reinforce what I've said. Or, you can let me know what your view is. Just make sure to include the “Why” behind your reasoning.

With respect to this article, let me know how you use mind maps during your day.