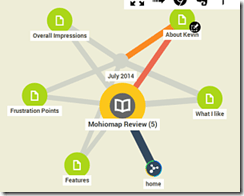 This is a review of Mohiomap. It's a visual mapping program that takes all of your Evernote information and turns it into one huge visual map.

Since so many people use Evernote, I thought it would be good to go over Mohiomap, to see what it can and can't do. I had a fun time using Mohiomap, and I was able to find some neat the applications for it, but I also ran up against a few limitations.

I’ll go over everything in the video.

This review is part of the Visual Mapping Review Series 2014.

Have you ever wondered what Evernote would be like if you were just able to have a visual interface to it? We'll that's the plan behind Mohiomap. It takes Evernote and goes deeper and let's you apply a visual map filter to all your notes. Sit back, relax. Let's have a look at Mohiomap for Evernote.

Hey, it's Kevin. Today I want to talk about Mohiomap. I'm going to go in and show you the Evernote section, but you can use it for Dropbox and Google Drive as well. I've got a bit of a review prepared under Mohiomap, so let's check it out.

If you're not familiar with who I am, let me give you a quick idea. I'll head over to About Kevin, and we'll open it up. I'm the author of Visual Productivity, It's a pretty cool eBook on visual mapping. I'm also the creator of the XMind Cheat Sheet, which is also really awesome. And I train people how to use visual maps. It's kind of a neat job.

Anyway, that's me. Let's talk about a couple things I like about Mohiomap, some things I think are frustration points and then I'll give you my overall opinion.

I want to talk about a couple of things I like about this. I can either open it in my Evernote program or on the web. For simplicity, I'm going to use the web application.

What I like is that you can definitely just drag and drop things around. One of the really cool things is that there's an in-graph search. This means that instead of when you do a search, it searches everything in Evernote, it's just searching particular things. It's pretty cool when you're working with the Visual Mapping look of things.

In order to activate the in-graph search, you can see right now I have everything all over the place. If I hover over Mohiomap review, that's the one I'm taking about with you today, there's a little navigate button. I'm going to click on navigate, and that clears away all the clutter, and just lets me focus in on that particular task that I'm working on. Now, if I want to search for Kevin.

I can do a search, and boom, it only provides results that are relevant. That are ones I've looked for. What's great about this, is it combines the visual aspect of using a visual maps to see Evernote and hopefully cut through the clutter. It also still allows you to use the powerful surge that Evernote provides. It's a neat way to combine a couple of different areas.

The other feature I wanted to show you was just how easy it is to drag and drop things. I'm going to go back my Mohiomap review. Let's just say for instance, I wanted to drop it into something else. I've got my house file as well. Let's just say we wanted to drag the About Kevin into a different file. Instead of grabbing this, and trying to drag it, because you can do that, but it's not going to move it, what you want do is see this little magic icon that's on the side and grab that. If I drag it down, I can move it down to my House File. It says, “Move to this notebook.” Then, it's as simple as letting go. Now, it's added to that notebook.

Let me go in and talk about a couple of frustration points. Some things that I'm not a huge fan of. Let's open it up.

There's too much effort, and there's too much top-level clutter. Evernote only let's you go two levels deep. To give you an example, I did the same review, when I was doing it, on XMind. In XMind, it's kind of 5, kind of 7, kind of 9 levels deep. Clearly, I don't usually go this deep. Partly, I was just doing it as a demonstration, but also partly, sometimes you just need to go little bit deeper.

Something else I wanted to talk about is called the relevance feature. I'll show you it in a second, but what it does is it ratchets down the time filter. It's more of a time filter than a relevance filter, because I really feel that sometimes, something I've thought about a year or two year ago might be more relevant than something I just wrote down yesterday.

What it does is it let's you see only things that you've recently entered into Evernote. You can see that I've got a lot of things that I've opened up. As I grab the relevance feature, and I start scaling it back, things are going to start dropping off as I get nearer and nearer.

You can see by the end there's nothing left. I can see where you can say, “I just put it in here a week ago,” and all of a sudden you ratchet it up to see what you created a week ago. I'm not sure. I'm not feeling it quite yet, but maybe you can find a use for it. If you can, go ahead and leave me a comment.

Overall, here's what I think of Mohiomap. I think it really helps you see Evernote information more clearly than just by going in and having a look at the straight file.

I think it's good at what it does, which is, taking reams of information, taking lots of information, and just going over that first quick skim. To try and find what's most relevant, and then letting you go in and get more done.

That being said, I think there's just too much work that has to go into a to-do list. For me to recommend it productivity-wise, for your daily use, it has to be faster. It has to be a littler simpler. Again, a lot of people use Evernote. If you use Evernote and you want to get that quick skim and get that information and track things down this may be exactly what you're looking for. So there you go. That's my take on Mohiomap, which is pretty much just a skin on top of Evernote.