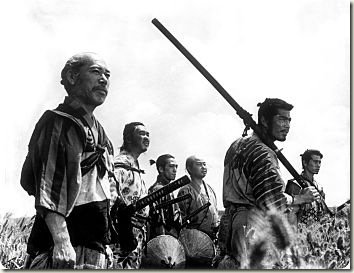 After hearing so many good things about the movie, I finally took the time to watch Seven Samurai for the first time. It’s likely you’ve heard of it, and many of you have no doubt seen it too. The movie is considered one of the best epics of all time.

By today’s standards, Seven Samurai has a very slow pace (A remake is scheduled to be released in 2011). It’s super-long (almost 3 1/2 hours) and almost put me to sleep at times from a lot of scenes that could have been shortened in my opinion.

Luckily, all the boring parts are made up for by having complex and interesting character development. The samurai steal the show. In the end, I found plenty of good takeaways from the film. I’ll share my favourite 3 characters and what ‘achievement-based’ learning you can take away.

A town keeps getting attacked by a band of outlaws who steal their food and supplies. The poor townspeople find seven out-of-work samurai to help them fend off the invaders. The samurai then teach the town how to fight and they work together to save the village. Unfortunately, not all of the samurai make it.

Since Seven Samurai came out in 1954, many other movies have borrowed the model. One of the best know remakes is The Magnificent Seven, which transports the plot to the Wild West. 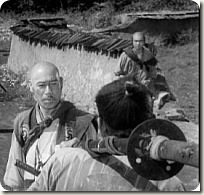 In the movie, Kanbe Shimada is a brilliant tactician. He keeps calm, cool, and collected at all times and uses the power of his words to get the most out of people. Kanbe has the entire defensive system laid out on a map, which he uses to direct the defenders during the final battle.

Here’s one of Kanbe Shimada great quotes, “Danger always strikes when everything seems fine.” Truer words have never been spoken.

Achievement Takeaway: Good leaders take the time and effort to thoroughly plan every part of their strategy, down to the smallest detail. Then they ensure that those working with them are trained up to a reasonable skill level to get the job done. They also seek to understand their opposition so they can defeat it. 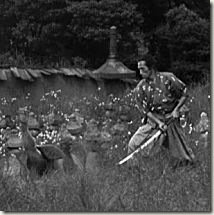 The best swordsman in the movie doesn’t brag about how great he is. Instead, he makes statements about what he plans on doing and then goes out and does what he says. At one point in the movie, Kyuzo says he will capture one of the muskets being used by the opposing bandits. He heads out in the middle of the night and comes back the next morning with the musket in hand.

Achievement Takeaway: If you remember the old adage of under-promising and over-delivering you should be safe here. Only promise what you can faithfully deliver. If you make the effort and go above and beyond expectations, recognition is likely to follow. Giving more than your customers or associates expect is one of the fastest ways to become more successful.

Kikuchiyo is the most colourful character in the move. I think the the actor portraying him goes a bit over the top at times, but in any case, there’s no doubt that he attracts attention. Almost everything Kikuchiyo does is an attempt to look good in front of the other samurai and the villagers. He’s brash and does some crazy things that no normal person would do.

Achievement Takeaway: Sometimes it’s good to be a little cavalier in what you do. That’s not to say that you should be completely reckless in your actions, but remember that it’s usually the times where you take a chance that you have the biggest breakthroughs.

If I left off your favourite samurai, feel free to leave me a comment and tell me why they should have been here.